Matthew 24:27 ...'For as the lightning cometh out of the east, and shineth even unto the west; so shall also the coming of the Son of man be.'

We could stop right here and know from the above verse exactly what the Bible second coming of Christ Jesus will be like. From the east to the west, every eye shall see Him coming like lightening in the sky. Thankfully God doesn't stop there, as He gives us much more evidence so we can be without doubt about how Jesus will return.

Matthew 24:23-26 ...'Then if any man shall say unto you, Lo, here is Christ, or there; believe it not. For there shall arise false Christs, and false prophets, and shall shew great signs and wonders; insomuch that, if it were possible, they shall deceive the very elect. Behold, I have told you before. Wherefore if they shall say unto you, Behold, he is in the desert; go not forth: behold, he is in the secret chambers; believe it not.'

These are the build up verses to verse 27, and here Jesus is warning us not to be deceived by any counterfeit coming. There will only be one true second coming of Christ Jesus and EVERY EYE will see it happen all around the world. So if someone tells you that Christ has returned or you see something on the news ... BELIEVE IT NOT ... because you will SEE Jesus return for yourself (providing you are living when it happens).

Even Satan, who will transform himself into an angel of light (2 Corinthians 11:14) will not be able to match the splendor and majesty and worldwide scope of Christ's second coming. He will try, but those who know the Bible truth will not be deceived. Which is why the TRUTH is so important.

1 Thessalonians 4:16-17 ...'For the Lord himself shall descend from heaven with a shout, with the voice of the archangel, and with the trump of God: and the dead in Christ shall rise first. Then we which are alive and remain shall be caught up together with them in the clouds, to meet the Lord in the air: and so shall we ever be with the Lord.'

Notice three important stages in these verses that happen during the same event. First, Jesus descends with a shout, and with the trump of God. So the Bible second coming is going to be a very noisy event, and there will be nothing secret about it, as many secret rapture theorists believe. Second, AT the second coming the saved in Christ who have passed away are resurrected and the saved in Christ who are still alive are 'caught up' together to meet Jesus in the air. Don't miss that point, because satan will not be able to re-enact this. It's DURING this NOISY second coming that the saved are 'caught up' into the sky to meet Jesus. Remember, up to this point, Jesus will not have set foot on the earth, which leads onto the third stage, which is, Jesus doesn't come down onto the earth and then receive His people, we meet Him IN THE AIR. Please engrave that point in your mind. This is the Bible truth.

HOW WILL JESUS RETURN?

Matthew 25:31 ...'When the Son of man shall come in his glory, and all the holy angels with him, then shall he sit upon the throne of his glory.'

So Jesus will come with ALL His angels. Do you know how many angels Jesus has? Look at Revelation 5:11 ...'And I beheld, and I heard the voice of many angels round about the throne and the beasts and the elders: and the number of them was ten thousand times ten thousand, and thousands of thousands.' ... This is probably a conservative number, but if we do the math of this verse, we come to at least ONE HUNDRED MILLION. Can you imagine? Jesus is going to return at His second coming with at least ONE HUNDRED MILLION MIGHTY ANGELS! This is going to be an awesome event!! 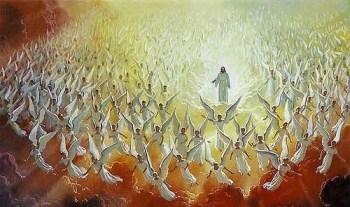 Lord Jesus shall be revealed from heaven with his mighty angels, in flaming fire taking vengeance on them that know not God, and that obey not the gospel of our Lord Jesus Christ.'

When do we rest? AT THE SECOND COMING. And what is the second coming going to be like? An ARMY of at least 100,000,000 MIGHTY ANGELS coming with Jesus in FLAMING FIRE!! This is going to be a glorious and dreadful event at the same time, as it says in Malachi 4:5...'the great and dreadful day of the Lord.' ... Glorious for the redeemed, but dreadful for those who are lost.

Acts 1:9-11 ...'And when he had spoken these things, while they beheld, he was taken up; and a cloud received him out of their sight. And while they looked stedfastly toward heaven as he went up, behold, two men stood by them in white apparel; Which also said, Ye men of Galilee, why stand ye gazing up into heaven? this same Jesus, which is taken up from you into heaven, shall so come in like manner as ye have seen him go into heaven.'

As these verses clearly state, Jesus will not secretly 'rapture' people away; He will not secretly return and appear to certain people. He will return in the clouds with all His mighty angels and we will look up to Heaven and see Him return, just as the disciples looked up and saw Him ascend into Heaven. Friend, this is the Bible second coming truth, not some made up fantasy story, like the left behind novels.

Revelation 1:7 ....'Behold, he cometh with clouds; and every eye shall see him, and they also which pierced him: and all kindreds of the earth shall wail because of him. Even so, Amen.'

EVERY EYE WILL SEE HIM RETURN!

Psalm 50:3-4 ...'Our God shall come, and shall not keep silence: a fire shall devour before him, and it shall be very tempestuous round about him. He shall call to the heavens from above, and to the earth, that he may judge his people.'

Hebrews 12:26 ...'Whose voice then shook the earth: but now he hath promised, saying, Yet once more I shake not the earth only, but also heaven.'

Revelation 6:14-17 ...'And the heaven departed as a scroll when it is rolled together; and every mountain and island were moved out of their places. And the kings of the earth, and the great men, and the rich men, and the chief captains, and the mighty men, and every bondman, and every free man, hid themselves in the dens and in the rocks of the mountains; And said to the mountains and rocks, Fall on us, and hide us from the face of him that sitteth on the throne, and from the wrath of the Lamb: For the great day of his wrath is come; and who shall be able to stand?'

If you stick to the Bible truth, then there is no need for you to be deceived concerning the second coming of Christ Jesus. It is going to be the most spectacular event this world has ever or will ever see. So if you see a news report stating that "Jesus has returned" or someone tells you the same, then you will know from the above Bible verses that it will be a false messiah.

Revelation 19:14 ...'And the armies which were in heaven followed him upon white horses, clothed in fine linen, white and clean.'

There can be no mistake as to how Christ Jesus is going to return at the second coming. The scriptures are very clear in telling us that the second coming is going to be a universally visible, noisy, fiery event that every eye on this planet will see. Please seek the Bible truth so that you will not be deceived by any counterfeit coming.